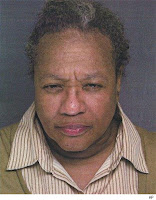 This was one grandma who had enough!

58-year-old Cordelia Chisolm boarded a bus at the 69th Street Bus Terminal in Upper Darby(just outside of Philadelphia) with about 20 other people, including a young woman talking on her cell phone.

Chisolm sits in a seat, and the young woman, still talking on the phone, sits down next to her. Chisolm waits a few minutes, mumbles something about the girl's language and that there are little children on the bus, then gets up to move to another seat.

The 22-year-old woman rolls her eyes, and says something to the person on the phone about "Some old lady . . . "

Chisolm turns back and says "This old lady will put a bullet in your mouth."

Tragedy was prevented when a good samiratan jumped between them and calmed Chisolm down, and even escorted her off the bus. Chisholm was later arrested. Though sheh's never been in trouble with the law before, she's been given $50,000 bail, and changed with but she was not licensed to carry a gun.

Now, you know I don't condone gun violence, but look . . . don't YOU hate it when someone get on the bus, enters a restaurant, or sits down next to you in any public place and is in their cell phone AND STARTS CURSING LOUDLY!!!!!

I mean, I'm not one of those folks who say people shouldn't talk on the cell phone at all in public spaces (except the movies!), but I don't think I should be bombarded with nasty filthy language simply because some jerk has enough money to buy a cell phone.

And I get even more upset with the verbal bombardment when there are young kids in the area.

So I don't believe Chisholm should have pulled a gun on the chick, but I sure know there are time when I would have liked to have done the same!

Check out the video . . . courtesy of ABC News, Channel 6 in Philadelphia!

Posted by Karen E. Quinones Miller at 8:31 AM No comments:

Rapper T.I. talks man down from hotel roof in Atlanta 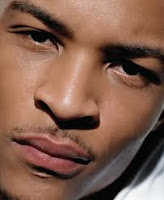 T.I., who lives in Atlanta, was in his car listening to V-103 yesterday afternoon when he heard a report that man was threatening to jump off a hotel roof in downtown Atlanta.

T.I. (aka Clifford Harris) called the radio station and talked to DJs Ryan Cameron and Rashan Ali to get more details and drove to the location where he asked police negotiators -- who were trying to talk the man down -- if he could get a shot at the megaphone.

Perhaps the potential jumper -- who still has not been identified -- is a T.I. fan. T.I. quickly shot a phone video which police brought up to the rooftop and showed to the man saying that he understood what the man was going through, and wanted to talk to the man. After viewing with video, the man agreed to come down from the 22-story Colony Square Hotel and talk to the rapper up (down?) close and personal.

After a few minutes of talking to T.I. the man -- who has only been identified as Joshua, aged 22 -- was taken to Grady Memorial Hospital for a psych eval.

So yeah, our boy T.I. can be a bad boy at times -- arrests for buying machine guns in the parking lot of an Atlanta grocery store; smoking weed and popping E while driving down Sunset Blvd. in Beverly Hills, CA for instance. In fact, he's going in front of a federal judge tomorrow (Friday 10/15) to face parole violation charges that can send him back to prison.

But yesterday's incident shows he can be a good guy, too. Nothing makes you feel better than knowing you may have saved a man's life.

Posted by Karen E. Quinones Miller at 7:26 AM No comments:

Kim Kardashian Gets Drink Thrown in Her Face

According to TMZ, the reality star was at Juliet’s,

on West 21st Street in Manhattan (which is Rihanna threw the release party for her most recent album, Rated R)

Rihanna at Release Party at Juliet
when a guy came up and asked if he could take a picture with her. Kim, of course, graciously complied.

The guy’s girlfriend went off.

She threw her drink in Kim’s face.

Kim’s younger sister, Khloe, then went after the girlfriend,

Kim Kardashian
and in the fray her wedding ring skid across the floor. At that point, Khloe abandoned her sister and dove across the floor after the ring. She eventually recovered it.
And good thing, too! The ring is reportedly 9 carats, and cost about $850,000. 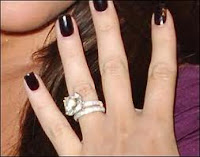 The 9 carat, $850,000 ring!
Of course hubby Lamar Odom, the NBA star she married after knowing him a month, can afford it. 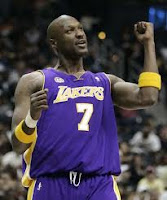 Lamar Odom
Hmmmm . . . I wonder how much child support he has to pay for the two children he had with ex-girlfriend Lisa Morales; whom he knew a bit longer than a month I would speculate . . . seeing as their kids were aged 10 and 7 when he married Khloe.

Lisa Morales and Lamar Odom
Oh well!
All in all I say it’s safe to say the drink-in-the-face incident was just part of a good night’s fun for the Kardashian clan. In fact, though, it may have been more business than fun. After all, the Kardashian’s were in town filming for their reality series.

I’m not saying the dramatic incident was staged.

But then again, I’m not.

Because, as they say, it’s hard Keeping Up with The Kardashians.

Posted by Karen E. Quinones Miller at 3:58 PM No comments: 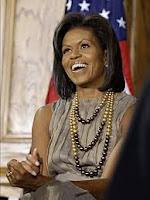 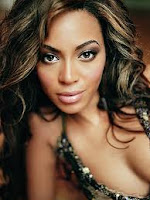 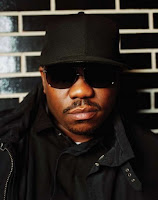 Rapper Beanie Sigel On His Way "Back Home " Behind Bars?

Seems like Gangsta Rapper Beanie Sigel just can't get enough of the Feds.

Or it could it be that the Feds just can't get enough of Sigel?

Whatever way you slice it, though, Sigel is under federal indictment -- AGAIN -- and this time for tax evasion. An indictment released earlier this week accuses Siegel of not paying federal income tax on about $1.54 million he earned 2004, 2005, and 2006.

But it won't be like Sigel would necessarily find himself in unfamiliar surroundings.

In 2004 Sigel, whose goverment name is Dwight Grant, was convicted on a federal weapons charge and spent a year behind bars.

Don't cry, though, it could have been worse.

He was orginally arrested for attempted murder after shooting a man in front of a Philadelphia nightclub. But the man and another witness changed their testimony, saying they couldn't say for sure it was Sigel who fired the shots.

As an aside, both men earlier told police they received death threats. So Sigel was acquitted of the attempted murder charges, but got stuck with that old nasty illegal guns charge.

Soon after his release in 2005, Sigel was once again in trouble. Seems that the feds had the nerve to tell Sigel to stay away from from drugs as part of his parole agreement. Like that was going to stop a real gangsta rapper? Not our Beanie! Sigel was thrown in the clinker again after failing -- not one, but FIVE drug tests.

Then Sigel was arrested again in 2008 after traveling to Atlantic City without prior permission from his parole officer. He actually only had to do one day behind bars for the violation, although he then had to spend six months in a half-way house.

Sigel's attorney, Fortunato N. Perri, Jr., pointed out that Sigel was incarcerated during part of the period he's accused of not paying his taxes, and said that other people were supposed to be handling the rapper's finances during that time.

"I don't think he's being targeted," Perri said,"he just needs to get his personal business and tax affairs cleaned up."

Sigel, who hails from Philadelphia, was once closely associated with Jay-Z, but released a diss record against the music mogul late last year. He later said he was hurt that Jay-Z had not visited or written him letters while 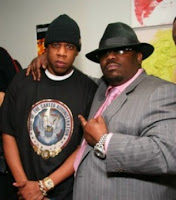 he was doing his time.
Posted by Karen E. Quinones Miller at 12:57 AM No comments: