Perhaps it's because it was recently announced that Janet Jackson is producing a film on Madame Stephanie St Clair, but lately I've once been getting quite a few questions about Bumpy Johnson, and how I wound up writing the only definitive biography on this legendary Harlem gangster.

I can remember when the name Bumpy Johnson first meant anything to me. I was ten years old, and still upset that my family moved from Harlem to the Bronx the year before. I found it hard to make friends and would often convince my mother to let me to take the number 2 train to Harlem to visit my pals from the old neighborhood.
On this particular bright sunny day in July 1968,  I happily trotted up the subway stairs, grasping the two shiny quarters – my weekly allowance which I planned on using to buy a hamburger and a chocolate milkshake at the Rexall Drugstore on the corner of 125th Street and Lenox Avenue. 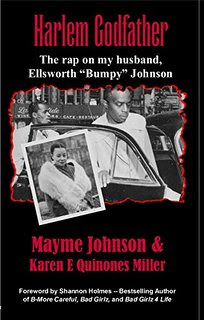 Oh, God, I was so impressed! Graham Court was huge, and had a gated courtyard with entrances to the four buildings which made up the complex. All of the buildings had locked lobbies with intercoms, like I had seen on television. The doorknobs and railings were shiny brass. The steps were made of veined marble. I had seen the apartment complex all my life, I once lived right around the corner, but I had only dreamed about actually going inside the gates. I was already feeling well-rewarded for my academic achievements.
After we were buzzed into the building on the southeast corner of the courtyard, Madame leaned down, told me to mind my manners, then knocked at the door of a first-floor apartment. A giant of a man with a tiny hat perched on the side of his head, grunted us in. Madame left me sitting in an overstuffed chair in a room full of strangers – mostly men – all waiting around, some playing cards, while she went into a back room. I didn’t care; for the half-hour or so, I was busy taking in the apartment. The ceilings were so high I knew even my tall cousin Wesley wouldn’t be able to reach it even if he were standing on one of our kitchen chairs. There was a chandelier, the first one I had ever seen, with a hundreds of tiny bulbs. I wished that it was evening instead of in the middle of the afternoon so I could see chandelier shimmer, or perhaps the warm glow of light that I just knew would come from the marble surrounded fireplace.
I was so impressed with the apartment itself, I took no notice of the furniture. I just knew the person who lived in this grand residence had to be a millionaire. I wondered who it was. Certainly not one of the men who were in the room with me. They were big rough-looking men, not the kind of men who could be the master of this magnificent home. I wondered if instead it was one of the people in other room who were speaking with Madame. I couldn’t make out what was being said among the raised voices, save for Madame, attempting to “explain” something.
Fifteen minutes later, a distressed looking Madame walked back into the living room along with three men. One of them was Mr. Johnson.
He was dark-skinned, with hair so short he looked bald, and dressed in an elegant dark blue suit. When he entered the living room, everyone stood up. He paid them little attention, he looked angry, and was walking, fast, toward the front door when he noticed tiny me in the large over-stuffed chair.
“Well, hello there,” he said his face breaking out into a crinkly nosed smile.
“Ke-Ke, sweetheart, say hello to Mr. Johnson,” Madame said, suddenly all sugar. “Mr. Johnson, I’ll have you know that my little Ke-Ke is the smartest little girl in her third-grade class.”
Even as young as I was, I suddenly realized that Madame had brought me to the apartment because she knew Mr. Johnson, would be angry with her about something, and she also knew that Mr. Johnson couldn’t stay angry around children. Especially smart children who liked to read Langston Hughes.
He actually knew Langston Hughes, he told me at that first meeting. I was impressed. The one question I had, I blurted out immediately. “Is he nice?”
“Real nice,”Mr. Johnson answered with a laugh. “Go get this smart young lady some ice cream.”

Until the movie American Gangster came out, and Mayme found out that Frank Lucas was telling people that he was once Bumpy's right-hand man.
"He wasn't nothing but a flunky," she said with fury in her quiet voice. "He must not realize for him to be telling them lies. Come on, Karen. Let's write this damn book."
Mayme Johnson was 93-years-old at the time. More than 300 people came out to the book launch party for Harlem Godfather when it was released in March 2008. She died a year later, happy that she had set the record straight.

And I am glad I was able to help. I finally got a chance to show, not just tell, nice Mr. Johnson: "Thank you."