I can remember when the name Bumpy Johnson first meant anything to me. I was ten years old, and still upset that my family moved from Harlem to the Bronx the year before. I found it hard to make friends and would often convince my mother to let me to take the number 2 train to Harlem to visit my pals from the old neighborhood. On this particular bright sunny day in July 1968, and I happily trotted up the subway stairs, grasping the two shiny quarters – my weekly allowance which I planned on using to buy a hamburger and a chocolate milkshake at the Rexall Drugstore on the corner of 125th Street and Lenox Avenue. 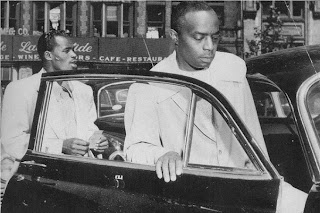 As soon as I walked up the steps from the station I could see something was going on. Even though it was the middle of the afternoon, the shoe repair store, which doubled as the neighborhood gambling spot, was closed. There were no shiny –faced Nation of Islam brothers hawking copies of Muhammad Speaks on the corner. Missing too were the winos who usually sprawled on the steps of brownstones, drinking brown-bag wrapped pints of Wild Irish Rose and Swiss Up. Something was up, and it had to be something big. A large group of people was milling through the streets – not a crowd or a mob, like I had seen during the Harlem riots just months before, but something gentler.  It seemed like a stream of swaying black faces, all pointing in one direction – east toward Central Park.

I pulled on the sweaty arm of one woman to ask her what was going on, but she looked down at me haughtily – readjusted her scruffy brown mink stole around her shoulders with one gloved hand, and gave me a slight push away from her with the other. Undaunted, and still curious, I tapped on the shoulder of a tall freckled teenage boy, dressed in his dark blue suit and a darker blue tie – obviously his Sunday best. “What’s everyone standing around for?” I demanded. “What’s going on?”
On any other occasion I’m sure the teenager would have shoved me away, too, but he was excited, and he seemed to want to share his scandalous knowledge.
“Bumpy’s funeral!” he answered me in a loud whisper, as if we really were in church, and not in the middle of Lenox Avenue.