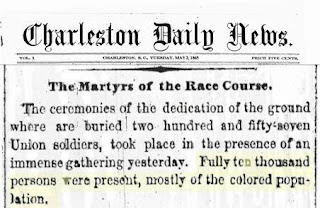 Me? I'm proud to be known as An Angry-Ass Black Woman, and I'm just as proud to say that I served five years in the United States Navy.

And Memorial Day means as much to Blacks in the United States as to any race here. In fact, the very first gathering to honor fallen soldiers was organized by Blacks.

It was in 1865, the year after the Civil War had ended. Ten thousand people, mainly Black people, gathered to pay homage to Union soldiers who had died fighting to keep the United States as one nation -- and, in doing so, rid the country of slavery.

During the wa r captured Union soldiers were held at the Washington Race Course and Jockey Club, which had been turned into a Confederate prison camp. Two-hundred and fifty-seven soldiers died in captivity, and were buried there in a mass grave.

In April 1865, Blacks living in Charleston, along with a few white teachers and missionaries undertook the task of digging fresh graves for each individual soldier, and transferred their bodies, one-by-one, to their new resting places. They built a fence around the site, then constructed an arch with the inscription "Martyrs of the Race Course." 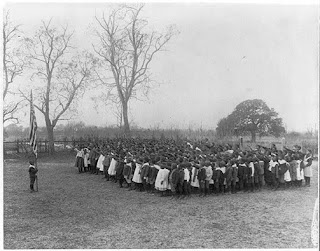 On May 1st, 10,000 paid tribute to the newly re-buried dead. Three thousand led the procession singing John Brown's Body and the Star-Spangled Banner, they were followed by women carrying flowers, wreaths, and crosses. Behind them came the men and Union soldiers. By the time the procession was finished almost the entire site was covered with rose petals.

Both local and national newspapers covered the event -- which was called "Decoration Day" -- including the New York Tribune.

Other cities in both the North and South have claimed to be the first to celebrate Decoration Day, but none of the claims -- that can be verified by newspaper or other published mention -- can be substantiated. It wasn't until the late 1990s that David Blight, a Yale professor, uncovered archives in Charleston that verfied the existence of this early celebration.

In 1868, Major General John A. Logan actually called for Decoration Day to be recognized as a national holiday, and proposed that it be celebrated on May 30th -- the thinking that there would more flowers in bloom at that time. It wasn't until 1967, though, that it officially became a federal holiday.

So there you have it . . . May 1, 1865. Charleston, South Carolina . . . the first organized celebration of what would become Memorial Day was started by grateful newly-freed Blacks.

Don't you just love a teaching moment?
.
Posted by Karen E. Quinones Miller at 7:07 AM No comments:

Yes, There Really Was A Black Wall Street

May 31, 1921.
Oklahoma. Tulsa, Oklahoma. Just a small area in the town some called Little Africa. Even more called it The Black Wall Street.
It was a section of town that housed Black lawyers, Black doctors, Black bankers . . . and Black banks.
It was a source of pride to live there, or to even boast they had relatives who lived there. It's destruction began 95 years ago today -- May 31, 1921 -- and it took only 24 hours and the worst riot in U. S. history to erase the Black Economic Mecca.
Posted by Karen E. Quinones Miller at 5:58 AM No comments:

Personally? I don't need the government to tell me what heroes birthdays are worthy of commemoration.
Do you?

Posted by Karen E. Quinones Miller at 7:18 AM No comments:

Many of you have seen this horrid photograph before, in some article about the horrors of lynching in the South or something of that like. In fact, though this is easily one of the most gruesome photographs of a lynching, it's also probably one of the best known.

Because see, there was a photographer -- at that lynching --  taking pictures, and he created postcards as souvenirs. I'm told they were a hot-selling item in 1916. Not quite as hot-selling as the charred fingers, toes and ears of the lynching victim . . . but hot enough.

But let me not simply call him "the lynching victim." He's been called that too many times over the last 100 years. That just might be why we still now have to shout "Black Lives Matter."

(SAY MY NAME!)
His name was Jesse.

(SAY MY NAME!)
His name was Jesse Washington.

(SAY MY NAME!)
His name was Jesse Washington, and he was only 17-years old. A farmhand. Looking forward to his 18th birthday just a few months away.

On May 8th, he was sitting in his yard, happily whistling and whittling away when Deputy Sheriff Lee Jenkins walked over and told him to get into the law enforcement official's car.

Although Jenkins would give no reason why, Washington complied. Most colored folk would back then in 1916, since they were still colored. Tired, the teenager innocently fell asleep in the back seat of the police car. The last peaceful sleep he would have here on earth.

Washington swore he didn't do it. After some hours of "Waco-persuasion," he changed his mind.

The sheriff would later say that Washington gave him information as to where to find the murderous hammer used to bash in her head.

The trial was held on May 15, 1916. It lasted less than an hour. The jury took four-and-a- half minutes to find him guilty.

Judge Richard Irby Munroe nodded and was about to hand down Washington's sentence when a voice from the back of the courtroom called out; "Get the nigger!"

A mob of more than 500 men dragged him through the streets, and cut off his testicles before tying him to a tree. They then lowered him over a bonfire, and then raised him back up, only to lower him again. They did this for two hours, while a crowd of about 15,000 cheered . . . . though not quite loud enough to drown out Washington's screams.

As his body finally lay on the ground smoldering some of the crowd would reach over and snap off a finger or a toe.

When his body finally cooled school children reached inside his jaw and snapped out teeth to sell as souvenirs. They sold for a hefty five dollars apiece.

Law enforcement was there, and so was the mayor. No one did anything to stop the gruesome lynching of Jesse Washington. In fact, there are rumors that it was the mayor who called photographer Fred Gildersleeve over to City Hall for the express purpose of taking pictures to commemorate the occasion.

(SAY MY NAME!)
"Jesse Washington was an illiterate and probably didn't even understand the charges against him," the northern liberals cried!

(SAY MY NAME!)
"It could have been the husband who killed Lucy Fryer, not Jesse Washington," the Black newspapers shouted!

(SAY MY NAME!)
"As people of color, we know that we all that any  one of us could be the next Jesse Washington!" hollered the northern Black community and political leaders!


Oh yes! Most of the nation was outraged about Jesse Washington's barbaric and torturous slaying.

For a couple of years, anyway.

After awhile there were other lynchings to discuss. The Red Summer of 1919, with all of it's race riots in Detroit, Washington D.C., New York City. Prohibition starts. Bessie Smith is singing and recording the blues. The Harlem Renaissance begins.

(Say My Name!)
People still talk about the "Waco Horror."

(Say my name?)
Black politicians begin to emerge in the North and South and still refer to the "Waco Lynching" to get folks riled up.

(say my name? please?)
The Civil Rights Movement starts and progress is being made left and right by Black folks and, "Thank God, we don't have any more lynching like that one kid back in Texas. What year was that again?"


His name was Jesse Washington, he was 17-years old. And yes, too many people have forgotten his name. The nation was outraged at this death, newspapers editorialized, W. E. B. DuBois frothed at the mouth, and . . . now . . . ?

In 2012 another 17-year old African-American boy was slaughtered, and his death also outraged a nation.

I wonder if it's because Jesse Washington's name was so easily forgotten that this other teenager's death was also allowed to happen without consequence to his murderer?


Maybe if we learned lasting lessons from what had already happened to us we wouldn't be mourning the death of a 18-year old in Ferguson, and mourning not only his death but the fact that his death was not avenged.


Perhaps if we remembered Jesse Washington -- remembered what happened to him and why --- perhaps . . . just maybe, the memory would have us so on guard, so on point, that a 12-year-old boy playing with a toy gun might still be alive.

Because maybe our collective racial memory would have been so strong that we would have already let the powers-that-be-know that we will not just stand by and let them pick off our young Black men and women.


So! This is your American History lesson for the day.

Damn right! And if you mean what you say about never forgetting these names we won't have to have this same American History lesson a hundred years from now.

Because there'll be no need. 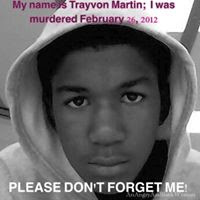