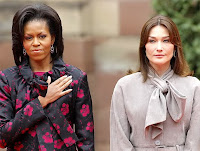 A new biography on French First Lady, Carla Bruni-Sarkozy, says that during a visit to the White House earlier this year she asked Michelle Obama how she liked being the First Lady of the United States, and Obama replied: "Don’t ask! It’s hell. I can’t stand it!"

The book, Carla and the Ambitious (Carla et les ambitieux), was written by journalists Michael Darmon and Yves Derai, supposedly in collaboration with Bruni-Sarkozy. A former supermodel, actress, and singer, Bruni-Sarkozy -- an italian heiress -- was known for her romances with Rock icons such as Mick Jagger and Eric Clapton before marrying French President Nicolas Sarkozy in 2008. 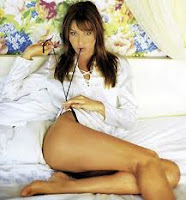 Carla Bruni-Sarkozy in her modeling days

The book was released on Thursday, causing a round of denials from both the U. S. and French governments.

The White House sent out a press release strongly denying the quote attributed to Michelle Obama early Thursday morning, and the French Embassy in the United States also told the press that the quotes were fabricated.

"Mrs. Bruni-Sarkozy distances herself completely from the content of the book," Embassy spokesman Emmanuel Lenain, told U. S. television reporters. "The words attributed to the First Lady of the United States were never said."

When confronted with the denial, co-author Derai said he stands by the sources who gave him the information, adding that the conversation took place between a private talk between the two First Ladys in March. This would, of course, imply that the source was Bruni-Sarkozy herself, but Derai said he would not reveal his source.

And while he backed off earlier claims that Bruni-Sarkozy collaborated on the book, Derai states he used 50 different sources for the book; and that the French First Lady granted the co-authors about 10 hours of interviews over a course of several sessions.

He then, however, went on to stress that the book was my no means, "an official biography."

Ironically, another biography of Carla Bruni-Sarkozy was also released this week. Carla: A Secret Life was penned by French journalist Besma Lahouri, who asserts that Bruni-Sarkozy considers Michelle Obama a rival. According to the book, she sees Michelle Obama the only one able "to challenge her for the title of the world's sexiest and most glamorous first lady."