Police are investigating whether a 28-year-old Washington state woman splashed acid on her own face in an attempt to get intention!

Bethany Storro had told police that an unknown woman walked up to her on a city street and said, "Hey, pretty girl, do you want to drink this?" and then threw a cup of acid in her face.

Storro described the woman as being "black with a slicked-back ponytail," and a police subsequently released a composite sketch of the alleged attacker based on her description.

"It was the most painful thing ever," Storro told the AP. "My heart stopped. It ripped through my clothing the instant it touched my shirt; I could feel it burning through my second layer of skin."

But now there are some who are questioning her account. For one, people say, Storro is deaf. How could she have heard what the woman said?

And a group of homeless people, said that there was no one in the vicinity when Storro fell to the ground writhing, and screaming that she's been attacked.

Storro was supposed to appear on Oprah, but canceled the appearance after doubts were raised about the attack.

Police will be holding a press conference at 4 p.m. PST (7 p.m. EST) to talk about the case.

Storro had received an outpouring of both sympathy and money after leading the police -- and the nation -- that a black woman with a slicked-back ponytail walked up to her in the street and threw a cup of acid in her face. Storro said she'd never seen the woman before, but told police that the woman had "this weirdness about her," and said she thought the woman might have felt jealousy or rage for some reason.

"It was the most painful thing ever," she said from her hospital bed. "My heart stopped. It ripped through my clothing the instant it touched my shirt; I could feel it burning through my second layer of skin."

In a press conference about a week after being released from the hospital, Storro said she wanted her assailant found, but she planned to forgive her so that she herself could move on.

Storro's parents released a statement Friday morning, saying that they did not know why their daughter would manufacture such a hoax, and apologized to the nation for her behavior.

They also said all the monetary donations sent to Storro would be returned.
Posted by Karen E. Quinones Miller at 6:43 PM 2 comments: 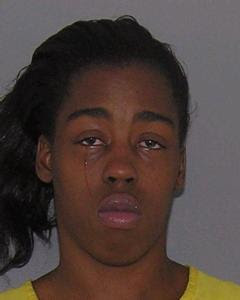 This is just sad. The 21-year-old Ohio mother actually used her cell phone to tape this, then sent it to a friend. The friend was justifiably (in my opinon!) mortified, and sent the video to Child Protection Services.

Mother was arrested and the daughter was removed from the home. 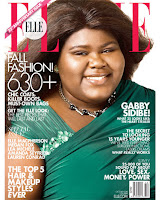 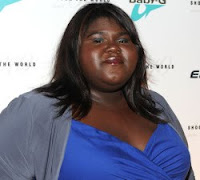 Gabby's Skin Lightened for Fashion Mag Cover?
Gabourey Sidibey
Look at the pictures yourself, and you decide!
Elle Magazine has released statement that there was no more retouching of Oscar nominated actress Gabourey Sidibey's cover pic than any other cover pics they feature.
I don't know . . . things that make you go . . . hmmm!
At the same time, I do think it's great that Elle is featuring Gabby, who became an overnight success after making her acting debut in the movie, Precious, which also starred Monique.
And do keep in mind, funny things can happen to a person's complexion when you consider photo lighting and makeup.
Okay, so I don't know how I feel about it. What say you?
Posted by Karen E. Quinones Miller at 5:41 PM 3 comments:


It was revealed yesterday that a bizarre lawsuit was filed in Miami, stating that basketball superstar -- Shaquille O'Neal -- tried to plant child pornography on an ex-employee's computer in attempt to prevent him from spilling the beans about O'Neal's extra-marital affairs.

Shaq, however, says Shawn Darling -- who filed the suit -- is an extortionist who tried to get $12 million from him.

The suit filed by Darling, who worked as a computer consultant for the basketball superstar, says that O'Neal first engaged him in 2007 to erase the basketball player's computer of any information -- including emails -- that showed evidence of a slew of affairs, including ones with rap

In the suit, Darling also says that O'Neal's computer also had details about his affair with Swedish model Dominica Westling.


After the computer wipe, a relieved Shaquille then threw Darling's computer into a lake behind his house, and gave him money to buy a replacement I-MAC. He later fired Darling.

O'Neal was married at the times of the alleged affairs.

According to legal documents obtained by Radaronline.com, Vanessa Lopez -- identified as another one of Shaquille's mistresses who accused him of harrassment --was then contacted by Darling, who told her that O'Neal was trying to hack into her email account and voice mail to erase any info about an affair. 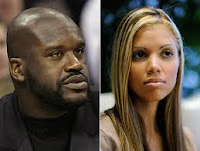 According to the lawsuit, when the former detective notified him that the dirty deed was done, Shaq then wrote back in an email: "ok but in the meantime o boy needs to be put in jail, we have way too many law enforcement connections to let a criminal try to get over on mine o mine, we don't need any distractions as we deal with Harvard guy, shoe line guy, restaurant guy, real estate guy and everything we are planning to do after basketball life..."

In the suit filed in Miami, Darling states he is in fear for his life as O'Neal is a powerful person with close friends in law enforcement.

But there are two sides to every story. Yesterday O'Neal released a statement saying:

"Shawn Darling, a computer consultant engaged by basketball star Shaquille O'Neal to install and service a home theater and then service personal computer equipment, copied without permission thousands of emails and communications from Mr. O'Neal," reads the statement.

"Darling, an ex-convict with a long criminal record that he failed to disclose and hid from Mr. O'Neal, has demanded $12 million in exchange for not releasing Mr. O'Neal's personal and confidential emails and communications. When Mr. O'Neal refused to be extorted, Darling filed a lawsuit claiming 'invasion of privacy and emotional distress.'"
Posted by Karen E. Quinones Miller at 3:28 PM No comments:

A movie featuring the case of one of deathrow's most famous inmate, Mumia Abu-Jamal, will be shown on Tuesday, September 21st at 8 p.m. at the Constitution Center located in Independence Mall.

"Justice on Trial" The Case of Mumia Abu-Jamal," details all the alleged injustices which took place at Mumia's trial for killing police officer, Daniel Faulkner in 1981.

You can watch a trailer for the film below.


JUSTICE ON TRIAL - The Case of Mumia Abu-Jamal from bignoisetactical on Vimeo.

Posted by Karen E. Quinones Miller at 2:30 PM No comments: 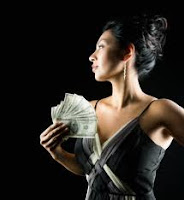 Calling All Gold Diggers - New Reality Show is Looking For You!


You know who you are . . . to paraphrase Kanye: "I'm not saying you're a gold digger, but you're never messing with no broke n**** . . . " Well, there's a nationwide casting call for women who admittedly look for rich men instead of jobs.


The show is called Sugar Babies (uh huh! you know what that means!) and is being produced by 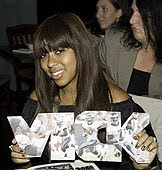 
fiancee of Philadelphia Eagles quarterback, Michael Vick (as an aside . . . Vick will be starting in the Eagles game against this Sunday!!)

-- and hopes are that it will premiere on a television network (I'm still trying to find out which one!!!) sometime early next year, according to 3BG spokesperson, Hanae Mason.


"We're looking for women who don't mind dating older men, and don't mind someone taking care of them," Mason said with a little laugh.


If you're interested in auditioning for the reality show, Sugar Babies, and you're between 21 and 35, just send and email to sugarbabiescasting@gmail.com . And stay tuned to this blog for more information as it comes in.

And if you haven't read Daaimah S. Poole's two novels about gold diggers, this might be a good time -- check out "A Rich Man's Baby," and "Somebody Else's Man."
Posted by Karen E. Quinones Miller at 9:58 AM No comments: