In defense of the title, An Angry-Ass Black Woman


Why would I title my autobiographical novel An Angry-Ass Black Woman?

I know that's going to be one of the first questions I'll be asked in interviews.

I think the term Angry Black Woman got a bad rap a few years ago. I’m not sure when the phrase was first used, but I know people started using it to describe certain African-American women. The term was used for women who were loud, abrasive, moody, and always ready to tell someone off -- for basically no reason.Then when the term was used to describe Michelle Obama, my question was . . . why? Not every woman is an Angry Black Woman. Why did they decide to attach that term to her? Personally, I found it insulting. Insulting in light of what the media has put forth as a definition of an Angry Black Woman.

I think An Angry-Ass Black Woman is a woman who gets so fed up with a situation surrounding social justice – or other matters – that she stands up and does something about it, and in a very public and in-your-face way. Harriet Tubman was An Angry-Ass Black Woman. She got beat with that whip one too many times and she said, “To Hell with this. Why am I being chained, worked to death, and beaten? Because I’m a slave? Well, I’ll be a slave no longer.” And not only did she “free” herself, she made trips back and forth from the South to North to free hundreds of other slaves. She was An Angry Ass Black Woman. 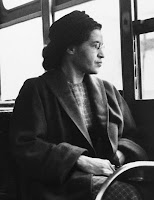 And how about Rosa Parks. She got on the city bus, she was tired after a hard days work, and all she wants to do is give her feet a break as she traveled home. But then the bus driver tells her to get up so a white woman can sit down. Ms. Parks said, “No. I have every right to this seat as anyone else paying their fare. I will not get up.” She let her anger at the situation move her to make a stand. A stand, mind you, that helped start the Civil Rights Movement. At that moment, she became An Angry Ass-Black Woman.

Then there’s Sojourner Truth. Ida B. Wells, and many others. All of these were women who were being wronged and got angry about it, and instead of just slinking away muttering curses under their breath, they did something about it.
These were all Angry-Ass Black Women, and I am proud to count myself amongst them. 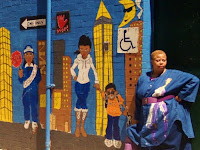 Got a problem with that? I thought not! <smile>
Posted by Karen E. Quinones Miller at 3:54 PM