Happy to report that when I weighed myself on April 6, I was down to 277 pounds! That's a 10 pound weight loss, y'all! 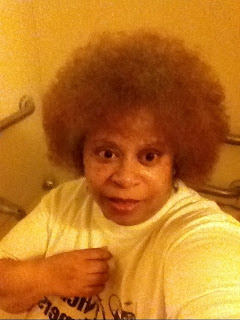 I know James Brown hadn't yet started wearing an Afro when he sung this song, but I decided to sport mine, anyway. <grin> This is a picture of me at my new 277 pound weight, taken yesterday, April 11th.


So a few days ago I posted on Facebook that I was on a diet, and the response was so touching I actually shed a couple of tears. Here's that April 9th post: 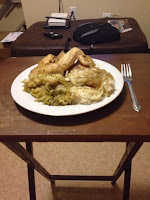 I can't believe how easy it is to stick to this diet. I have to stay under 1,270 calories a day, and I only messed up once in the last two weeks. I got an app, MyFitnessPal, that helps me count calories and log meals and exercise...and lets me know how close I am to my goal. This dinner of three chicken wings , one cup of white rice, six ounces of cabbage, with one tbsp of chicken fat (flavoring is a necessity!) comes to less than 600 calories! I'm doing well!!!!


(Actually the meal was 681 calories, but I was still 18 calories under my daily allowed limit!)

I don't know why I decided to share it on Facebook, I've been going back and forth as to whether I should share the journey, but, well . . . I'm definitely leaning toward it

I've been doing okay with my daily diet . . . but not great. The crazy thing is I sometimes -- in fact, quite often -- have trouble  eating the required calories. I think one reason is the green smoothie that I have every day is so filling.
In fact, I kind of think that my starting on the green smoothie kick back in February is what has been making this weight-loss journey as easy as it has been.
Yes, you read it right . . . easy.
I've not woken up in the middle of the night with hunger pangs, wanting to raid the refrigerator. I don't want to sneak a couple of candy bars, here and there. Believe it or not, there's a 1/2 gallon of Turkey Hill Neapolitan ice cream that's been in the freezer since January. I haven't even been tempted.
Again, I think it's because I started on the green smoothies back in January. I'm just wondering if it's some kind of appetite suppressant.
Exercise has been something of a problem.  Because of my Multiple Sclerosis, my mobility is often limited, However, I just bought my niece, Anike, a new Wii dance disc. One of the songs on it was Miriam Makeba's song from back in the 60's -- Pata Pata. Shoot, as soon as I heard that I jumped up and started doing the moves along with the cartoon figure on the screen. (Yeah, I know I'm not using the correct terms, but whatever . . . ). I only did 7 minutes, but hey . . . it counts toward cardio, and it's better than nothing!